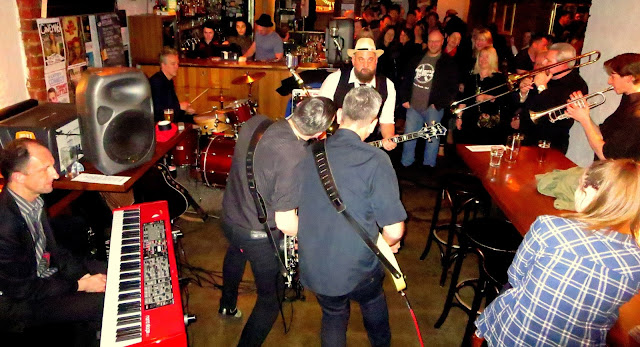 It wasn't easy capturing a photo of all seven members of Dave Wright and the Midnight Electric at The Catfish in Fitzroy two weeks ago. The boys were scattered about the downstairs bar like straphangers on a crowded train, keyboardist Daryl Johnson and drummer Neil Salmon the only ones lucky to find seats. It made for an uneasy setting up: Groups of people who'd been sitting at tables found themselves gradually inundated by musical equipment and -- even worse -- musicians. Man-of-a-thousand-gadgets Rob Barber planted himself and his six-string beside the door, guaranteeing all Catfish entrants between the hours of 8:00 and 11:00 an immediate face-to-guitar-neck encounter. The band was eager to play but this pre-gig game of musical chairs was unsettling, at best. 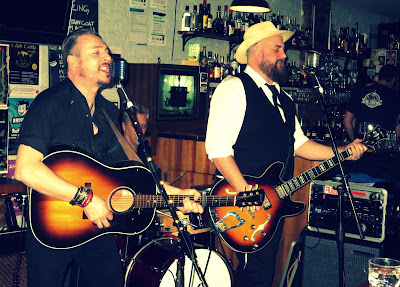 Turned out to be a common phenomenon at the Catfish. I stopped in for one of their fine craft beers the following weekend and had a quick chat with one of its owners, a jovial, Melbourne-born bloke named Michael. He described the familiar routine of bands walking into his bar, seeing the stage area, staring incredulously, and wondering how in the hell it would work out. All, he said, found happiness, as the venue's low ceilings and cramped confines proved secondary to the proximity to a lively, appreciative crowd in a truly great pub.

The band's performance on this Friday night in Fitzroy attested to that. Here's proof: A song called 'Into the Big Blue'. It's from their first album The Lucky Country that Dave only recently added to the setlist. It builds with the patience of Springsteen's 'Jungleland' and explodes with a guitar solo that echoes David Gilmour's on Pink Floyd's 'Comfortably Numb'. Dem's big words, but see for yourself:

Due to the remarkable work of local-legend Michael Egan a number of videos from the Catfish show may be viewed from the comforts of home on YouTube: Drinking Days, Railroad Song, Over the Top and another angle of Into the Big Blue.

DWME played two full sets. While it's probably a stretch to call it a dilemma, figuring out what to play and when before crowds that don't know your music is a challenge. DWME aren't a niche band that cranks out an hour's worth of genre-friendly product night in, night out. They're a band raring to release a second album with an unusually diverse collection of original songs at the ready. With that in mind it wasn't a surprise they kicked things off with the brand new, never-before-played 'When the Needle Hits the Red', a personal song that's open to all kinds of interpretation, all of them affecting. The rest of the first set was similarly risk-taking, with crowd favourites like 'Over the Top', 'The Spitting Image' and DWME's cover of The Church's 'Under the Milky Way' mixed with dusted-off gems and another new song called 'Summer Girls'. 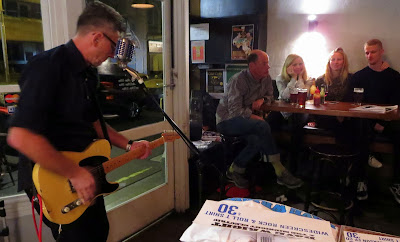 If you're a fan of the band you listen to an opening set like that knowing the engine room will be fully coal-fired in the second set. But if you're not familiar with the band's catalogue, like the table of people to the right of Rob in this photo (left) who traveled to Catfish to attend the show but left after the first set, your impression of the band's sound is incomplete. Not the end of the world, of course, but to judge a DWME show without hearing incendiary staples like 'Streets of this Town', 'Father', 'Sweet Caroline', 'The Lucky Country' -- I could go on -- is akin to leaving a Southern barbecue before pie is served. Just. Not. Done. 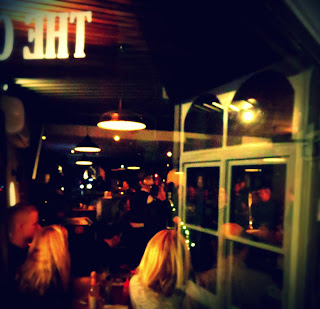 As the night wore on foot traffic in and out the door led me to stand beside it to ensure it remained closed between punters. Better me than Rob, who was busy laying down guitar licks and background vocals. I stepped outside at one point to appreciate the vividly Melburnian tableau of a band bringing the heat to a venue as original as the music being played. Throughout the second set Dave and bass player Big Tim Cav moved among the crowd, an exercise that usually requires hopping from a stage but on this night took only a step or two. The Midnight Electric horns -- trombonist John Bryant and trumpeter Anthony Foon -- stood opposite Dave and Tim and more than one patron nearly suffered a decapitation via John's trombone. It was a night that began with trepidation but ended in celebration. In other words, a typical night at the Catfish, and another great night in the city of Melbourne with Dave Wright and the Midnight Electric.

Ride the Sydney CBD/NSW coast via a promo video (my work). 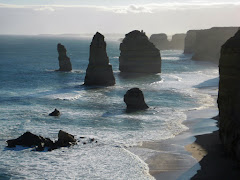 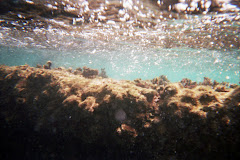 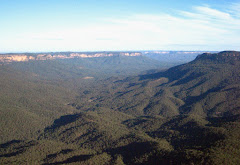 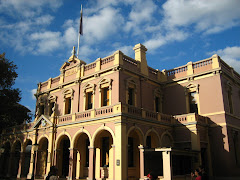